In which we look in a little more detail at the works of Joseph Backler Snr, apparently in his heyday from about 1813 to the mid 1820s, after which his name recedes into history and his fortunes appear to plummet, for a variety of reasons which will become more clear when we look in the next blog at events unfolding around his wayward son, Joseph Backler Jr.

At the height of his fame, the following article – almost certainly penned by a friend – appeared about Joseph Backler (The Gentleman’s Magazine, Vol 121, April 1817, p. 315):

‘Among the present existing artists and there are several of great merit where superiority is so generally allowed, it can scarcely be thought invidious to elect the name of Joseph Backler, who in the few years he has practised it has, by his talent and genius, extended the powers of the art of glass-staining almost beyond hope of its eventual perfection, and whose industry and unassuming manners promise a continued excellence, and deserve a correspondent encouragement.  A view of his exhibition in Newman Street, now open to the public, will supply a proof that friendship has not overrated his praise.’

Praise indeed!  The catalogue for this exhibition listed a number of works, principally featuring the ‘Great Norfolk Window’ – King John signing Magna Carta – to be placed in the Baron’s Hall of Arundel Castle, commissioned by the Duke of Norfolk.  Alas, this along with most other Backler windows, no longer exists. 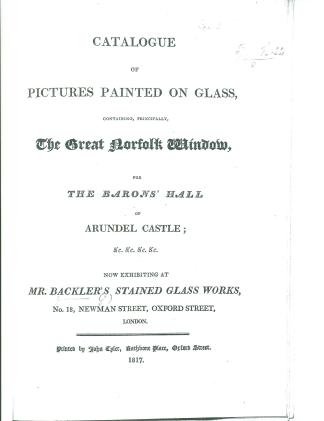 Some idea of the look of the window can be seen from the image on the right. (credit:ancestryimages.com).  It depicts ‘Signing of the Magna Carta by King John’, anonymous engraver after a picture by Lonsdale from a painting by Backler, published in James Barclay’s Complete and Universal Dictionary … about 1850.

On the left below is the cover of the catalogue for the 1817 exhibition, in which we find more detail about the art of glass painting, as opposed to stained glass:

‘The window for Arundel Castle was begun under the immediate direction and management of  his Grace the late DUKE OF NORFOLK, who delighted particularly in this effective and elegant Art.  It is presumed that the present Work may vie in all respects with most attempts, in modern days, toward the advancement of the art of Painting upon Glass, as the panes are considerably larger than perhaps in any Work of the same magnitude in Europe; and when it is seen that throughout the whole Window there is not a single piece of what is termed “pot metal glass”, that is, glass formed into one colour in its making, the difficulty of producing the brilliancy of tone apparent in this Picture will be duly appreciated…’ [Referring then to the ancient art of leaded stained glass, the catalogue goes on to say]: ‘ The mosaic here spoken of was the mode pursued by all the ancient glass-painters, and consisted of pieces of coloured glass leaded together.  To form their draperies, &. they were unable, as in modern glass-painting, to execute a picture without the aid of lead-work and pot metal glass; nor had they, as some persons supposed, near so many colours on the palette as modern Artists of this Art are able to produce; consequently, ancient glass, though beautiful as to colour and effect, yet in respect to anything like picture and outline must leave the judicious observer much to regret, from a total disregard of drawing and perspective.’

Modestly [!], the catalogue concludes: ‘In giving publicity to this performance, Mr. BACKLER had no intention of indulging personal gratification: but several Artists of high talent, and others conversant in the Art itself, having earnestly recommended its exhibition; and his Grace THE DUKE OF NORFOLK having kindly acceded to the proposition; he has ventured to submit his effort to public candour and discernment.’  The cast of characters in this window features the Duke of Norfolk as King John, in addition to whom, the Catalogue tells us: ‘The resemblance of the Mayor of London to Harvey Christian Combe, Esq.; of Almeric, the Master of the Knights Templars, to Captain Morris; and of the Page, to the Son of Howard Molyneux, M.P. will be readily discovered.’

Joseph Backler’s other works – major and minor:  As early as March 1813, Backler was advertising his works at ‘Backler’s Gallery of painted and stained glass, 18, Newman Street’ (see for instance, The Times, 23 March 1813, which claimed: ‘Church windows of every description or architecture executed in a superior manner’).  Whether through word of mouth, adverts, self-promotion, family ties or other means, Backler subsequently executed and exhibited windows for, among others:

Limehouse Church (described in ‘The Examiner’, Sunday 19 December, 1813), like many others of Backler’s windows, based on a painting by Benjamin West, who lived near to Backler in Newman Street.

Woodford Church, Essex, 1819.  I suspect this was St Mary’s Woodford, for which an Act of Parliament was passed in 1816 for enlarging, improving and repairing.  If this was the case, the window most likely was destroyed in the fire of 9 February 1969. (http://www.stmaryswoodford.org.uk/history  – accessed 18 May 2016) 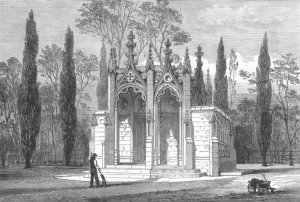 Mausoleum, Claremont:  On 11 June 1818, The Times reported that His Royal Highness the Prince Leopold went ‘by appointment’ to Mr. Backler’s premises at 18 Newman Street, remaining for an hour, to ‘make suitable arrangements for the stained glass intended to be placed in the Mausoleum, which has been erected at Claremont, with much taste, in Gothic architecture, by Mr Hiort, under the immediate direction of his Royal Highness, to be devoted to the memory of our late much lamented Princess [Charlotte of Wales, 1796-1817, who died after giving birth to a stillborn son, leaving her husband distraught after fewer than two years of married life].  The whole of the windows are to be filled with the armorial bearings of Her Royal Highness, in conjunction with those of Prince Leopold’s.’  The windows were advertised for viewing in April 1819.  The image is of the Mausoleum, which was converted from a summer house, and demolished in the 1920s. On 24 April 1819, a report in The Times wrote of a private viewing, that Mr. Backler’s productions ‘unite the greatest riches and variety of ornament with great breadth and simplicity of effect.  The arms on the mausoleum windows are painted with exquisite richness and brilliancy…’   In July 1819, Prince Leopold and the Duke and Duchess of Kent visited Mr Backler’s studios to view the windows, which were also seen by the Duke and Duchess of York.  Perhaps somewhere, in some archives, there hides an image of these windows?

St Thomas’ Church, Dudley (1821, east window – this window has been seen by my distant Backler cousin from Australia, but I have not made the journey to see it – on my do-do list!); at this time Backler also advertised viewings for altar windows ‘for the churches of .. Southwell, and Macclesfield‘.  I have not been able to identify which churches these were for.

???Stansted Park Chapel, Stansted Park House, Sussex: The following extract is self explanatory. I have never seen a reference to this place in anything I have seen about Joseph Backler, leading me to think he was not the artist: International expert Mark Bambrough of specialist Scottish Glass studios carried out restoration work to the East Window, which had previously been repaired following bombing during WW2, but in recent years it became clear the repairs were failing. The glass was cleaned and fragments painstakingly re-assembled before being housed in protective panes and re-installed. It is painted, not stained, with a delicate enamel technique. The original artist is thought to have been either Joseph Backler or James Edwards, but no documentation survives. (http://www.hha.org.uk/DB/news/stansted-park-chapel-restored.html)

The east window, 40 feet high and 20 feet wide, representing the Lord’s Supper, is considered the largest in this branch of the art since its revival in England; the figures are 15 feet high, and beautifully painted by Mr. Backler, from West’s picture of the Lord’s Supper, at an expense of £2000, towards defraying which Dr. Cope, canon residentiary, bequeathed £500.  (From: ‘Henstridge – Herringby’, A Topographical Dictionary of England (1848), pp. 482-491. URL: http://www.british-history.ac.uk/report.aspx?compid=51026&amp;strquery=backler  Date accessed: 23 October 2009.)

References in the Dean and Chapter Act Book of Hereford Cathedral indicated that there were difficulties in raising the funds to pay for the window. Could these difficulties be related to Backler’s change of fortunes in the mid-1820s, resulting in his giving up the lease on 18 Newman Street, and also filing for bankruptcy?  It is interesting that Backler’s mother-in-law, Jean Cowie (the mother of Jane Cowie, of both of whom little is known) had to join in a bond for the advance paid to Backler in 1822, a time when he was clearly in financial difficulties:

26 Feb 1822: Notice of a legacy of £500 0 0 from Dr Cope towards a painted glass window in the east end of the cathedral.  Mr Backler’s of London design taken from West’s Last Supper approved by the bishop with a subscription of £100 0 0; the dean and residentiaries to subscribe £100 0 0 each.  Although the estimate may amount to £100 0 0 more they flatter themselves there will be no necessity to apply to any but the members of the cathedral and such as derive emolument from it to contribute to this very desirable ornament to the church.  Proposed to have the window completed by the ensuing music meeting.  Letters to this effect to be sent to the various officials [pp. 189-190]

8 Dec 1845: Advertisement to be inserted in a London paper intimating that the dean and chapter will dispose of the painted window in the east end of the choir provided it be re-erected in a church [p. 53]

25 June 1846: The dean read letters from Mr Evans of Shrewsbury and the Rev Guthrie of …. as to the east window of the choir.  Ordered that it be advertised for sale [p. 77]

17 Oct 1846: Painted window offered to Leominster church as a gift if put in the east window there and the organ removed from that situation.  This was owing to the necessity of removing the window to effect the restoration ‘of that portion of the church to its original form.  The parishioners of Leominster being anxious to adorn their church.  Matters left in the hands of the dean to arrange [p. 81]

St James’s Piccadilly: This window never came to fruition, though a model was constructed for it, about which we will read in the next blog about Joseph Snr’s ill-fated son, Joseph Jnr. No doubt the inability to raise sufficient funds for the window’s execution contributed to Backler’s general ill-fortunes in the 1820s:

In 1810 several ‘respectable’ inhabitants suggested that the east window should be filled with painted or stained glass. The vestry did not object, provided it was paid for by voluntary subscription, but only sufficient funds to pay for the upper part of the window were promised. The subject chosen was the ‘whole History of the Transfiguration’, and in 1813 Joseph Backler agreed to execute the work and fix ground glass in the lower part of the window for a sum of not more than £1250, or to complete the whole window for £2000, subject to the satisfaction of Benjamin West and Thomas Hardwick.

Backler was given permission to solicit for subscriptions in 1819, and in 1821 the vestry also instructed one of the rate collectors to ask for subscriptions and issued a printed appeal. Promises of funds were so slow in coming, however, that it was not until 1845 that The Builder reported, accurately, a rumour that a Gothic stained-glass window was to be put up. (http://www.sjp.org.uk/buildinghistorya.html)

Here we will leave Joseph Backler Snr, tracing his later years in the next blog, which introduces his son Joseph Jnr.  I have found no reference to further works by Joseph Backler.  He just seems to have ground to a halt, and how he occupied his later years, in an artistic sense, until his death in 1848 remains a mystery.  However, any number of misfortunes were to befall him, including his separation from his wife, the bankruptcy of his brother Samuel Backler, and the death sentence, commuted to transportation, on his son Joseph.

This site uses Akismet to reduce spam. Learn how your comment data is processed.