A bit of a technical sideline: In which we take a quick look at some research I did some years ago using the Middlesex Deeds Register.  It really didn’t help me locate any more information about Samuel Boulding’s origins, but I include it here…because it is there!

Middlesex Deeds Register: Could the Middlesex deeds register at the London Metropolitan Archives (LMA) help me find out any more about Samuel Boulding’s origins? ?The registers exist for 1709-1938, while the memorials from 1838-1890 were destroyed in 1940.  The documents copied into the registers are abstracts from the originals, including the date of the transaction, the names of the parties, and a description of the property. After the middle of the 19th century, plans might be included, and from 1892 there are separate volumes of plan tracings.  There are indexes from 1709-1919 – the key caveat to all this is that they are in alpha-chronological order in annual volumes, under the surname of the vendor or first party. From 1920-1938 there is an alphabetised card index to the names of the vendors or first parties.

I give this detail about the indexes, because the challenge in using these records is knowing, first, an approximate date of the transaction, and second, the name of the vendor.  Then one has to consult binders at the LMA to check dates and coverage of the microfilm indexes, from which one extracts a reference which helps one find either a microfilm or an original register.  It’s pretty complicated.

The Register wouldn’t have been any help at all if I hadn’t had some other information to help me get started. This was found in a search of The Times on ‘Boulding’, which produced on 20 September 1797 a leasehold estate auction by the Executors of Mr John Spinks deceased. Lot 3 was ‘a neat leasehold house situate on the south side of the said street [Devonshire] and the corner of Beaumont Street, let on lease to Mr. Boulding, at a low rent of £55’.  Particulars were to be obtained at the Rainbow Coffee House in Pall Mall.

Without this information, I would have got nowhere in my search of the Middlesex Deeds Register – I needed the name of ‘Spinks’ to find the entry in the register.  With it, I found a whole series of leases and documents, including John Spinks’ Will (he was a carpenter) and documents showing that the original lease to Spink(s) in 1790 had been from the Duke of Portland, all this area being part of the Cavendish Estate.  What I didn’t find was any evidence of the lease to Samuel Boulding. I did find evidence of his predecessor in the property, a Louis Mange, perfumer, toyman and turner.  Boulding was also said to be a perfumer and toyman in directories of the time.

Yet I know from Sun Fire Insurance records and his will that Samuel Boulding held the property at 12 Beaumont Street on long lease, perhaps living there until sometime in around 1815 he moved to new premises in Upper Craven Place, Bayswater. 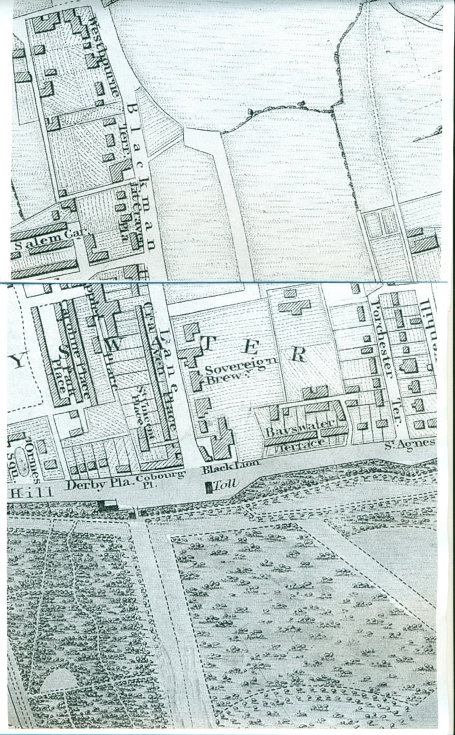 And so we move to 1844 and another auction.  It is not clear why this date was chosen – could it be that it was when James Boulding attained the age of 21?  This time it was the executors of Mr. Samuel Boulding, and was for the lease of 12 Beaumont Street, unexpired lease of 44 years (when had it started??); and the lease of 70 years on two properties in Craven Place, Bayswater, where Samuel lived when he died in 1829. This time I used the names of the executors as the vendors, and came up with documents for both properties – tracing the history of the various leases on 12 Beaumont Street, and identifying the beginnings of the Craven Estate through land transfers in about 1813.  Much much more work would be needed to track down the finer detail of both these properties. The language in the registers is opaque, complex, and there are mortgages and re-mortgages; mention of Samuel himself is sparse.

I have learned nothing new from the Middlesex deeds register about Samuel Boulding’s origins (although further searching might yield more information), but I have put flesh on the histories of the properties he owned and lived in.  There are houses in Beaumont Street which would have been contemporary (although now number 12 is within the site of the King Edward VII Hospital); and Craven Place, shown on the map adjacent to Blackman Lane (now Queensway), is now underneath Queensway tube station!  The location opposite Kensington Gardens was surely highly desirable then, as it is now.